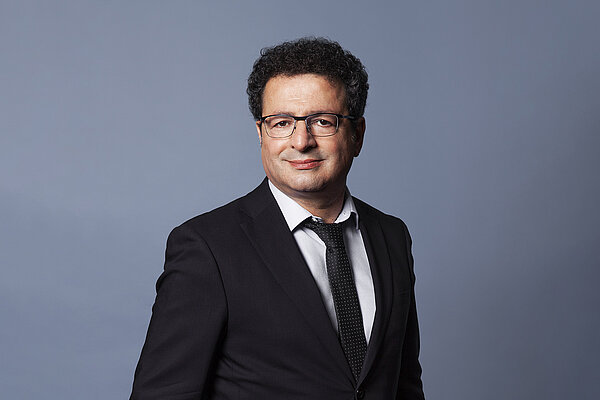 On Thursday, December 3, the trustees of Université Paris-Dauphine - PSL named their new university president. They selected Professor El Mouhoub Mouhoud, a member of the Economics faculty, and an internationally renowned expert in globalization and its effects on the economy.

Economics professor El Mouhoub MOUHOUD, the new president of Dauphine-PSL, has both long-term and short-term goals for his presidency. “I want to build a strong university that values engagement and collegiality, both of which are vital to our shared but ambitious goal to prepare our students for professional life while participating in the production of knowledge.”

An innovative university with global appeal

Professor E.M. Mouhoud wants to solidify the institution’s global reputation. A university that is innovative, open to the world, and focused on its tripartite fundamental mission: research, initial training, and continuing education. “I am very attached to the Dauphine model of a university that is selective while being attentive to the diversity of its student body, that provides a top-tier education and produces top-tier research, and that trains professionals of a high caliber, renowned researchers, and responsible citizens.” He is also keen to develop regional strategies for the Tunis and London campuses, and to encourage mobility through a multi-campus training program.Il se propose de développer également des stratégies régionales à partir des campus dauphinois situés à Tunis et à Londres et de favoriser la mobilité en déployant une politique de formation multi-campus.

Promoting the potential for interdisciplinarity at the core of PSL

El Mouhoub Mouhoud would like to see programs that bring together math, computer science, management, economics, social sciences, law, and the journalism school into the organizational and management sciences.  As an example, this might involve further developing the Dauphine Digital program through the creation of an international Master’s in artificial intelligence (AI) and organizational and management sciences. He is also keen to see truly interdisciplinary research contribute to the production of ethical and responsible AI.

And as student profiles evolve with high school new reform, Dauphine - PSL should also offer interdisciplinary tracks that meet new expectations and demands, such as a “Science and Arts” double Bachelor’s degree in collaboration with other PSL member institutions.

Benefiting from the opportunities offered by the new campus

A giant construction site also awaits President E.M. Mouhoud: the Dauphine-PSL renovations and the construction of its new wing. "This is quite the opportunity at a time when we’re rethinking pedagogy. It’s also an opportunity to create a healthy work environment for university staff." He envisages this as a major area of focus.

El Mouhoub Mouhoud received his doctorate in economics in 1991 from Paris I Sorbonne, where he wrote a thesis on the impact of technical change on the international division of labor. In 1991, he became University Lecturer at Université d’Evry Val d’Essonne, and he was appointed to the economics faculty in 1994.  He taught at various French institutions, including Evry, Bretagne Occidentale, and Université de Paris 13, before joining Dauphine-PSL in 2006.

His work focuses on the effects of globalization of the labor market, the competitiveness of territories, business relocation and offshoring, international migration, and development in the North African/Middle Eastern region. He has authored close to 100 scholarly articles in French and international journals and contributed to around twenty books, including Mondialisation et délocalisation des entreprises, 5th edition., La Découverte (2017) and L’immigration en France, Fayard (2017). He is currently working on a publication about relocation in France, which is forthcoming from Le Pommier.

El Mouhoub Mouhoud has also served as Scientific Adviser at Commissariat Général du Plan, an advisory group to the prime minister (France Stratégies) (1995-2007) and as a consultant to the OECD, the UN, and the World Bank. He is frequently invited as a visiting professor to the New School for Social Research in New York, to Princeton University’s Institute for the Transregional Study of the Contemporary Middle East, North Africa and Central Asia, and to Columbia University’s School of International and Public Affairs. In previous roles, he created and led the UMR CNRS economics laboratory CEPN (Centre d’économie de Paris Nord) from 1998-2006 and the Development of Euro-Mediterranean Economic Research (DREEM) CNRS international research network from 2007-2014.

At Dauphine-PSL, he has directed the Bachelor’s program in International Affairs and Development (2012-2017), the Master’s degree in International Affairs (since 2011), and also cofounded the Master’s degree in Peace Studies in collaboration with the institution’s computer scientists and political scientists. He was also elected to the steering committees of the Association Française de Sciences Économiques, the Conseil scientifique de l’Economie aux Rendez-vous de l’Histoire, the Printemps de l’économie, and the Conseil d’administration du musée de l’immigration.  He was awarded the Prix de la recherche des Scytales et voies de la réussite in 2004.